There is a three part test to find out if you are part of Generation Fucked. Try it now.

The results are in…

If you answered yes to any of the questions, then congratulations. You are part of Generation Fucked. And you are amongst friends.

It includes everyone who marvels at the standard of living and accumulation of assets that their parents were able to achieve on ‘normal’ jobs.

It includes everyone who bought into the great university rip off and racked up tens of thousands in fees only to find that no-one gave a shit about their Ancient History degree.

It includes all of you who have turned interning into a three year job application (still hopeful…?!)

It includes everyone who is working on a start-up in the hope of creating a steady job. Unicorn rodeo rider?

It definitely includes you if you spend more than 40% of your take home wage on rent. Or if you’re one of the 25% who still live at home (even just part-time to take the edge off).

What does it mean to be part of Generation Fucked?

In researching our new business, Lifetise, we’ve spoken to hundreds of people in their 20s and 30s about their lives, their hopes, their fears and their finances.

As you would expect, we heard many different stories, some good, some bad.  At times we felt like therapists – I’m sure we know things about people’s financial situations that they haven’t shared with their partners.

What was surprising was that there was a distinct lack of whinging. Everyone we spoke to seemed pretty accepting of their lot. Whilst the newspapers gleefully explain just how much worse Generation Fucked has it than previous generations, our survey showed that all of us poor little mites are just getting on with it.

We don’t need to be told that we are significantly less well off than the generation before us. We have eyes. We can see it. We perhaps hadn’t calculated that we were 21% less well off as at the same marker – but we definitely know we’re falling behind.

What’s clear from our research is that there’s no blueprint for how we should live our lives. The goalposts that we were brought up with have moved; or disappeared. We look at the difference between what we’ve got and what we expected to have and we don’t know if it’s ok.

So we delay a lot of the major life decisions and pretend that we don’t mind. We invest more time in our work because we feel we have more control that way and we convince ourselves that freelancing = freedom, whilst craving a stable monthly salary. Some of us try to save money, some of us can’t, some of us play the Euromillions and curse every time it’s won by someone over the age of 50.

There are 4.6 million freelancers in the UK – a 40 year high

We laugh at the quaintness of a job for life, as we build patchwork (portfolio) careers where hustle, following, and self-promotion count for more than ability. Us 30-somethings twitch at the seeming overwhelming confidence of the 20-somethings, forgetting that their role models are worth $200 million at age 25 and this is where they set their standards.

We over-rely on exclamation marks and emojis – keeping everything pepped up and positive. We generally believe in a sharing economy, but we can’t help but wonder whether it’s a race to the bottom for all but the paymasters. We denounce the 1%ers who made their money from flogging their countries’ natural resources, but some of us will find ourselves part of the new 1% that makes its money from flogging its peers.

We are the most liberal generations ever, but fewer of us drink, smoke, get knocked up early or take drugs. I guess for Millennials, when there’s so much uncertainty around what the future holds, it’s better to be sober and keep your wits about you.

Meanwhile, the over 65s are drinking themselves into a stupor… 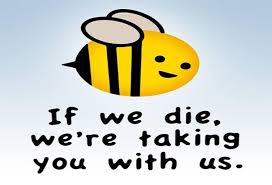 Right guys, I’m going to need you to get up to speed quickly on the past 18 months.

Remember BeNeighbourly? That planned saviour of local communities, friend of the lonely, promoter of all things nearby.

Dead. I killed it.

Let’s be honest, the bees were the best bit. The bees were great. Everyone loved the bees.

Unfortunately, “everyone” was only a few hundred people. And they weren’t that bothered about the app itself. Which rather suggests that I should have saved the money on the app development and just sold bee stickers.

For those (sickos) who like to pick over the bones of a failed start-up, here’s the post-mortem:

It wasn’t a specific-enough problem: loneliness is a general feeling. It’s not a clearly defined problem. Nor is there a clear group of people for whom it’s a problem. We didn’t have great hordes of lonelies milling around, wistfully looking for a solution to their woes (if I had, I would’ve given them a hug).

We were caught between two types of people (1) those who felt a bit lonely, but not enough to make them want to do something about it and (2) genuinely lonely people who were too scared to go and mingle, so didn’t get beyond creating a profile.

Not enough going on in the ‘hood: turns out, there wasn’t a whole lot of anything going on in our neighbourhood. We (by which I mean my lovely, patient, sister Vicky) spent all our (her) time trudging around looking for events to put in our listings. And boy was it patchy.

If your listings only ever contain the same 3 things, you’re done. Especially if those are baby rhyme time, knitting circle at the library, and jazzercise.

Twitter and Facebook already had it covered: those who wanted to get involved in local stuff had generally already sniffed out local groups on Twitter and Facebook, so people just weren’t bothered about joining another social network. Oh and then there was Streetlife (the existing local social network that we found out about the day before we launched; the one that had Stephen Fry doing their video voiceover; an office in Covent Garden and which had started in exactly the same area, so it was a local hero…).

And we hadn’t anticipated just how wary people are of new things. We tried to advertise our site on local email chat groups, but it was the equivalent of getting hounded out of town by angry villagers with pitchforks. People were very mistrustful of our motives. They didn’t want to BeNeighbourly with just anyone: only with a very select group of people.

Great features don’t mean a thing: we actually built some great features – matching users’ interests to local events and groups, so users were notified every time something new came on the site that matched their interests; and event organisers had an incentive to upload new events, because they would be pushed out to users who would be interested. Really nifty, we thought.

Unless you can get enough of an audience to put these features to good use, they are worthless. Without the event organisers, there wasn’t enough content to push to users, so it became redundant. We called that feature “Snap”. I mean goddamit, we gave it a name.

It should have been a local discovery app – on mobile: we realised pretty early on that what we should have built was a mobile app that helped people discover what was going on around them, using the sort of geo-tagging that FourSquare was built on.

Problem was, there were already tons of other start-ups building something similar that had already been funded. So we were just too late. (http://www.locappy.com/; http://www.spottedbylocals.com/app/; https://findery.com/).

But it’s not all doom and gloom. Because we found a new calling. We’re going to help all of us who are part of Generation F***** to navigate our lives of (mainly) debt, possible unemployment due to robots, crazy house prices and pipe-dream retirement.