I spent a night in Ilheus mainly because I couldn’t face another hour on the bus. But I told myself it was a culture stop to break up the beachfest.  This time, you’ll be pleased to hear, not only did I arrive after 8pm in the dark, but I hadn’t been certain of getting a seat on the bus from Porto Seguro, so I hadn’t booked anywhere to stay.

Things did not look promising in the bus terminal.  D.E.A.D.  I did a quick tour and found a cranky man behind a counter in the little café and, mercifully, he had some computers.  I don’t think my overwrought gratitude did anything to lift his mood, but I at least managed to find somewhere to sleep.  Of course, it was way across the other side of town and cost more in a cab than my 6 hour bus ride, but given that the alternative was playing hobo in the bus station, I wasn’t about to complain.

Naturally, I hadn’t researched much about Ilheus, other than that it was the capital of the cocoa trade, historically.  But I was game for seeing its sights.  The girl on reception laughed uproariously at my suggestion of walking to the town centre, but I made it part way via Praia dos milionares (millionaires’ beach).  Another day, another empty beach…  My only compadres were a pretty dead crab (as in: all dead, but nice to look at) and some shells that just called out for me to turn them into a crap miniature owl sand drawing.

Ilheus is a proper, bustling little city, but I’d tentatively suggest that it only really warrants a couple of hours’ exploring.  The historic town centre is really small and the important buildings (cathedral, presidential palace, theatre etc.) are within 2 minutes’ walk of one another. 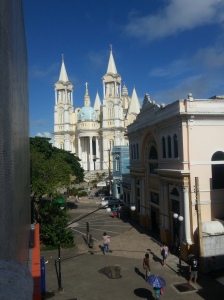 To up my culture credentials, I visited the home of the famous Brazilian writer, Jorge Amado, which is now a museum.  It’s a really lovely old colonial townhouse, with wonderful interiors (jacaranda inlaid floors and windows and Portuguese leaded lights).  There were two very friendly and enthusiastic girls giving the guided tours, taking visitors around each room and explaining the significance of them to the writer.  A crying shame then that I barely understood a word they were saying.  And it didn’t help that I’d never even heard of Jorge Amado or read any of his books.  Yep.  Philistine. 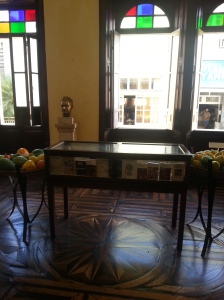 Still, I thought I’d made a pretty good show of it, all told.  Nodding sagely and hmmm-ing in all the right places.  Didn’t embarrass myself too much, I thought.

And then I blundered into a downstairs room where a TV crew was filming.  ::Cut::

Bad enough.  And then worse.  Because the TV presenter, a girl so highly polished that it hurt my eyes to look directly at her, pointed her microphone at me and started asking me questions.  Where was I from?  Was I a big fan of Amado’s work?  What did I think of the house?

Well folks, I’d love to tell you that, under pressure, I suddenly discovered a fluency in Portuguese that had previously eluded me…

Ha!  As if.  Nope.  Instead, I stuttered, flushed and mumbled something about it being very interesting.  The presenter nodded encouragingly.  So I repeated that 3 more times.  And when I realised that the cameraman was following me round the room, I found myself adopting studious “how very interesting” poses as I looked at the various objects.

And that’s a wrap.

Itacaré surprised me.  It’s a real little beachy/surfer town and even in off season it has a bit of life to it.  And it’s more touristy than I was expecting.  It has a strip of restaurants and bars (and, randomly, falafel to rival North London’s finest) and shops selling handicrafts and beachwear.  It’s not tacky, just seems more geared up for gringos than other places I’ve visited.  If you’re young and travelling around Brazil, then Itacaré should definitely be on your itinerary – it feels fun and sociable.

It’s got several beaches, all walkable from the town.  To get from one to the next, you just hop over the rocks.  Often, there’s no-one around, so you can have a little bay all to yourself.  My first day there, that’s what I did.  I hopped from Resende to Tiririca to Costa beach.  Costa was empty, so I made myself at home.  Just me, the sea and a rather excellent summer playlist (classic Prince, a bit of Roachford and Maxi Priest).

After a while, I went for a little paddle.  Out of nowhere, a lifeguard appeared.  He explained that the current in Costa was crazy strong, so I shouldn’t swim there.  I promised to stay in the shallows.  He told me his name was Jesús.  Very apt for a lifeguard, I thought.  We chatted a bit.  He spoke reasonable English and I’d already displayed my Portuguese prowess with my knowledge of “sea” and “dangerous”, so conversation was easy.

He told me about a beach a couple along, Sirioco, which was amazing and great for swimming.  He offered to show me if I wanted, since there was no-one on Costa that needed guarding.

As we hiked up a little forest trail behind Recife beach, climbing over a 7ft high locked gate onto a swing bridge high in the trees, I inwardly praised myself for my spirit of adventure.  This is the reason for travelling, I told myself: to be spontaneous and open-minded and meet friendly people.  I felt pumped. 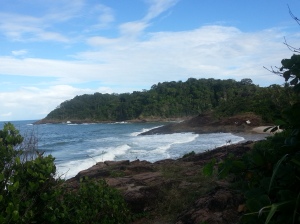 Although I was pretty knackered by the time we descended to the beach, I had to admit:  Sirioco was spectacular.  A little cove with a tangled wild forest backdrop.  It was pretty special, alright.

It was also totally deserted, but for the two of us…

I wasn’t worried.  I was an adventurer.  And besides, I’d been brought here by a lifeguard called Jesus.  When he said that he’d keep an eye on me whilst I swam, I was delighted he took his job so seriously.  My own private beach and my own private lifeguard.  I could get used to this.

He was right.  It was a great place to swim.  Big waves but no drag.  If I went out too far, Jesus whistled me closer to shore.  A real pro.

I came back in to dry off.  Laid out my sarong on the sand, shut my eyes and zoned out.  And it was wonderful.

Until I suddenly felt Jesus’ hands massaging my shoulders…

It was one of those moments where it dawned on me that I might have massively misread the situation.

This is a common enough occurrence for me.  But not normally in such extreme circumstances.

As Jesus was working away at the knots in my shoulders and telling me that he’d spent 18 months in Sao Paulo learning various massage techniques.  I was calculating my chances of survival if I ran for it and wondering if he was even a real lifeguard.  I mean, he was definitely wearing a red and yellow vest.  But I realised I hadn’t noticed what it said on it.  Oh no. Maybe this was some incredibly elaborate ruse to prey on naïve, 35 year old tourists.

Fortunately, Jesus was behind me, so he couldn’t tell that I was frantically scanning for objects to use as weapons.  He must have sensed something though.  “You’re very tense”, he said.  No kidding, strange man who’s touching me.  I took that as my cue.  “Erm, thanks very much, Jesus.  You’re really good at massage, but I’m just not feeling very comfortable”.

Jesus stopped massaging me and didn’t look at all put out.  So then I wondered if I’d got it wrong?  Maybe massage is just like shaking hands in Brazil?  Oh, why was adventuring so hard…?  I decided that I’d over-reacted and that it was just a friendly gesture.

We walked back via a different route.  We reached a waterfall and Jesus said “let’s go for a shower” and started stripping off.  Friendly?  Maybe.  But I think my Great British reserve just kicked in…

2 thoughts on “Costa do Cacau: Ilheus and Itacare”