I’m going to come clean.  I don’t have a big idea.  I don’t even have a medium sized one.  There are probably a few small ones scattered about somewhere in my brain (the mental equivalent of lost coins down the back of the sofa).  But I can definitely say, hand on heart, I do not have anything vaguely approaching a big idea.

It’s interesting, there’s a definite assumption that if you’ve quit your well-paid job to start your own business, it must be because you’ve got this amazing idea.  I’ve noticed that people are really uncomfortable with the concept that you might just be mooching along seeing what comes your way.  In a social or networking context it goes a little something like this: 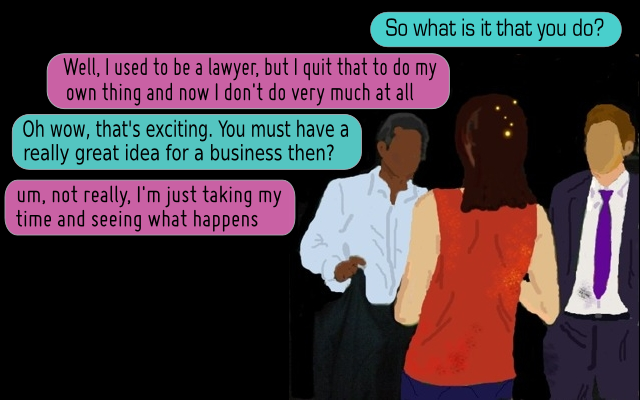 So without being in the slightest bit defensive, I thought it only right that I debunk a few unhelpful myths:

Take a look at any of the internet big guns: they all started out as something pretty different from how they look now.

Pay-pal grew from a digital wallet solution.  Facebook started life as “Facemash”, a “hot or not” ratings site for Harvard students.  Amazon, if you remember, started off just selling books.  Google and You Tube spent years in the financial wilderness before finding a revenue model that turned a profit.

So don’t feel that in order to create a worthwhile business, you have to have figured out the path to global success from the very beginning.  Chances are you are going to have to radically change your concept, business model or both along the way, so your best approach is to be mindful of this from the outset and welcome the process.

I’ve yet to meet someone who is in possession of the double-whammy combo of a crystal ball and hindsight.  Instead, we’re all members of the coulda, woulda, shoulda club.

I was supposed to go to a talk last month given by some important people in tech circles (Google, Groupon) on tech trends for 2013.  I couldn’t make it, but heard that it was interesting enough.  Conspicuously lacking in any substance though.  Mainly a rehash of what’s already out there with a bit of wishful thinking (Google+ anyone?  Anyone at all??).

I mean, between them, these guys have quite a lot invested in trying to work out what’s next for the tech juggernaut.  But they still don’t know for sure.  There were a lot of bets hedged.  So if they can’t predict the future, I’m sure as hell not going to try to.

Sometimes, the best ideas are the ones that are derived from something that’s already out there.  I’m not advocating stealing anyone’s intellectual property.  I am saying there’s no point reinventing the wheel (unless you are in fact inventing a better wheel).  If you can improve on an existing product or service then that is just as legitimate a business as creating something totally new.

Look for the gaps in functionality, application, quality, service, cost, target markets.  There may well be a business hiding in between.

Between them, Bono and Bob Geldof haven’t really managed to change even part of the world.  And they’ve got a heap of money and publicity behind them and they’ve been banging on about it for years.

If the strap line for the new iphone 6 is that it has brokered peace in the Middle East, then that’s a different story, but until then, we all need to get a bit of perspective.  (I actually think that unless Apple sorts out its woeful maps, the next iphone is more likely to incite violent land-grab insurgency, but I may be unduly pessimistic…).

This one is the most damaging in my opinion.  I have no problem with people aiming high, if that is what inspires and encourages them.  But more often than not, this sense of having to have a big idea in order for your business to be valid, does nothing except cause paralysis.

There is nothing wrong with wanting to create a business that is just big enough for you.  If you look around you, that’s exactly what most businesses are.  Small.

If your goal is to create an empire, then by all means, sharpen your sabres and round up your troops.  But I view that brand of business colonialism as outdated and slightly distasteful.  To me it smacks of sitting in a leather swivel-chair with the obligatory white fluffy cat.

I think it’s ok to dabble, to start small and see what happens.  Without the pressure of a big idea, there is more room to grab the small but perfectly formed ones.  I see it in terms of the Crystal Maze.  Those teams in the Crystal Dome who aimed high ended up jumping around with arms flailing trying to catch the gold tokens being blown all over the place.  They lost.  The smart ones aimed lower and were able to gather up the already fallen tokens from the floor.  They won.

So that’s where you’ll find me, scrabbling around on the floor, picking up the overlooked ideas…